As designers the main motivation of attending the competition was the genuine gesture in the competitions plot of creating a sport citadel for the region aiming to transform and adapt the identity of Mappano. Mappano being one of the small scale settlements of Italy, like Turin’s little brother we believe it is lacking an identity to become a center. The motivation of building a sport citadel in this previously swampland will bring a new spirit to this newly established city of Italy via integrating education, sports, visitors and most importantly new inhabitants. The new inhabitants and the visitors of the sport citadel will create a new sort of attraction to the small city. The strong character of sports, leisure and recreational areas that is pursuit will bring a whole new identity and usage to the re-born city. Such as the times that it was re-gained from the swamplands, the new intervention to Mappano of building a mild/modest yet effective sport citadel that will bring a new way of living and rejoice to the community. 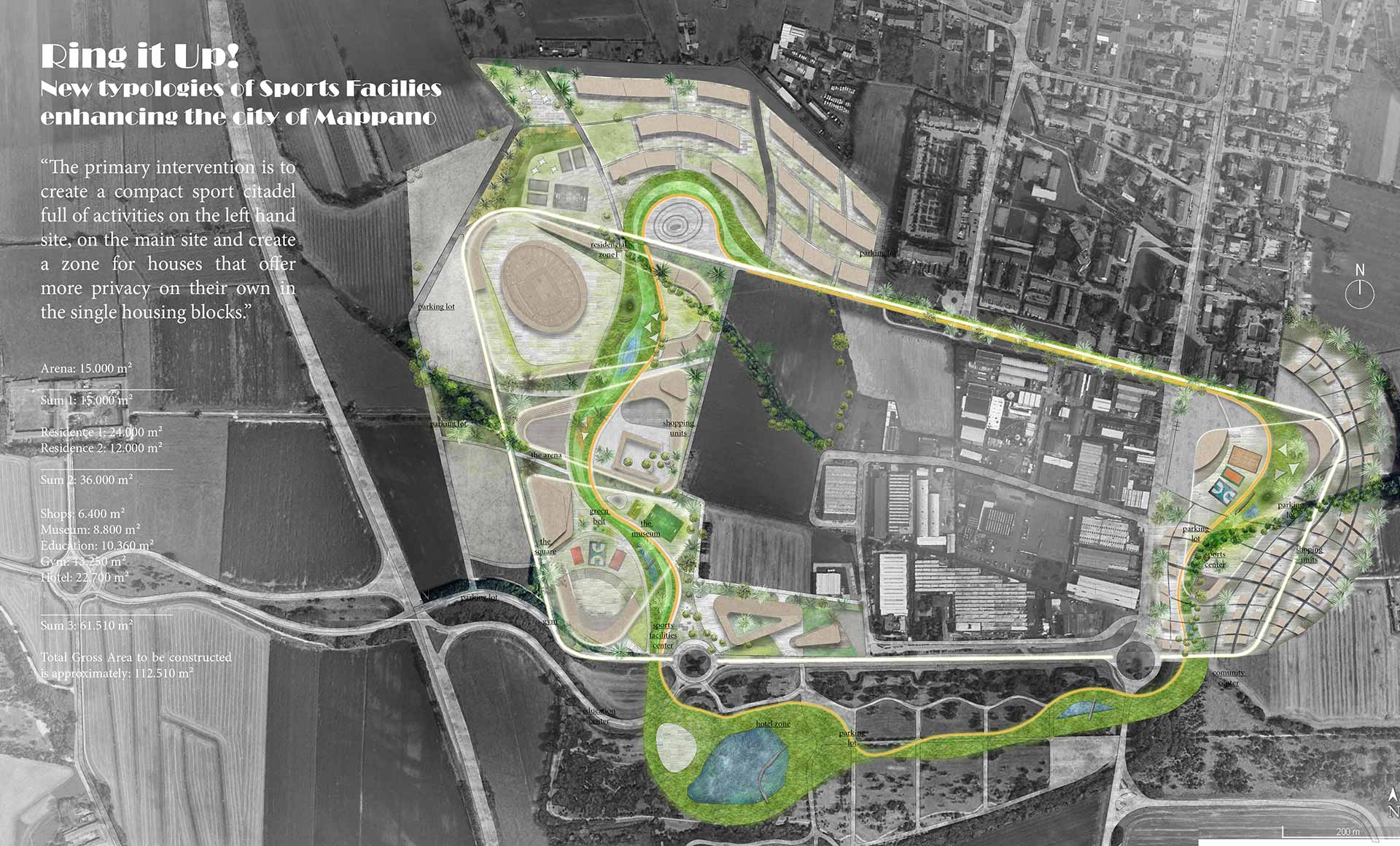 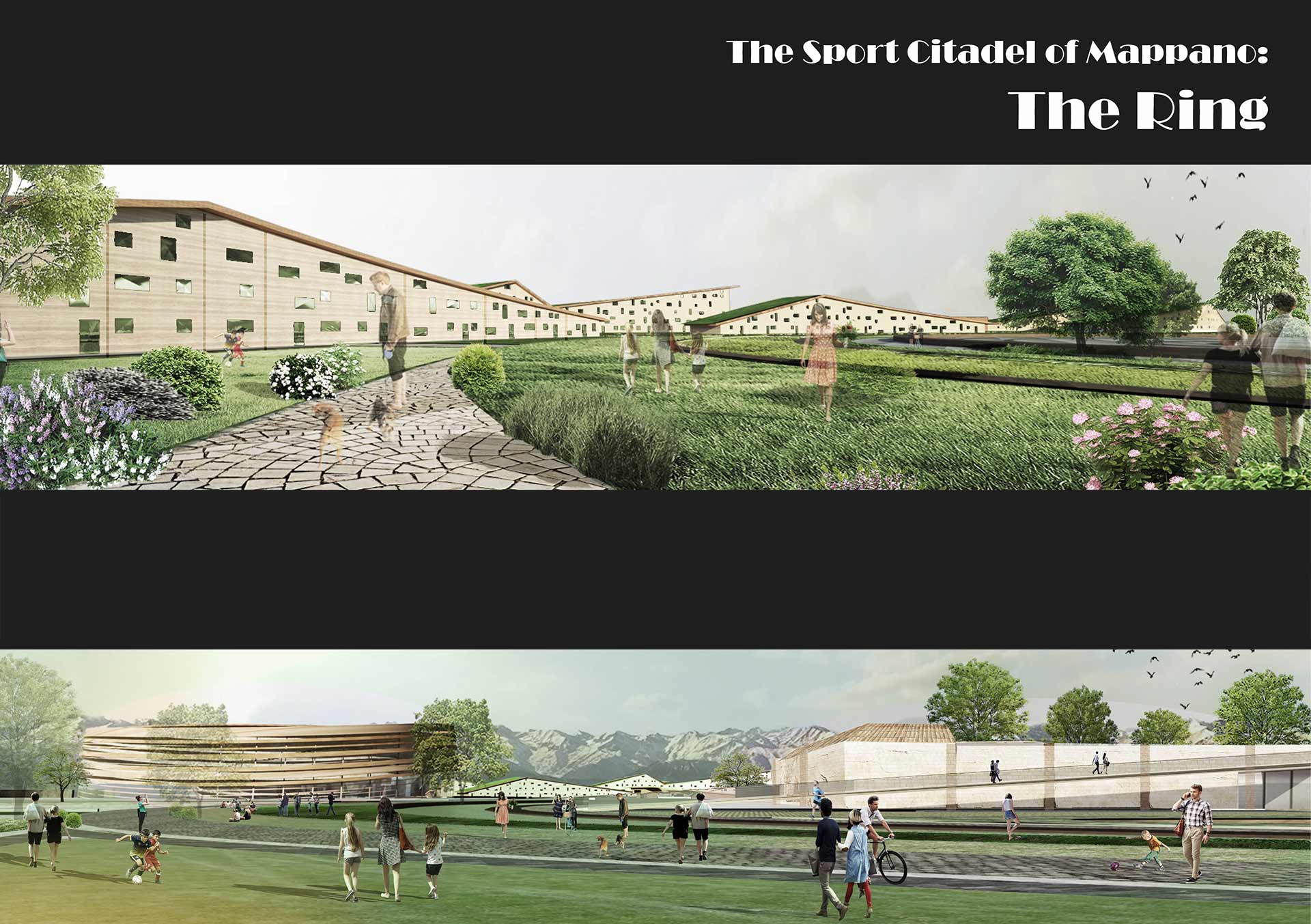 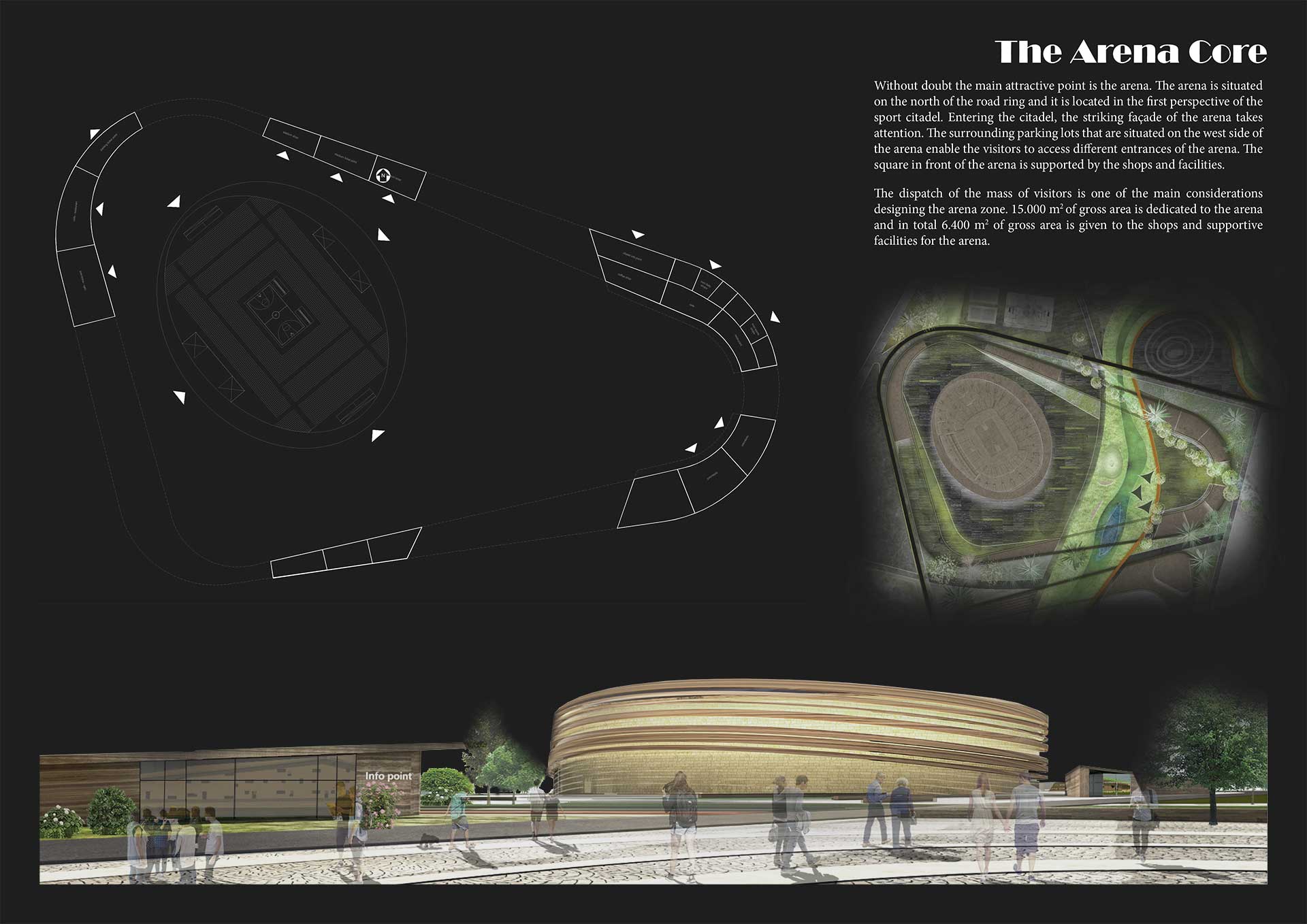 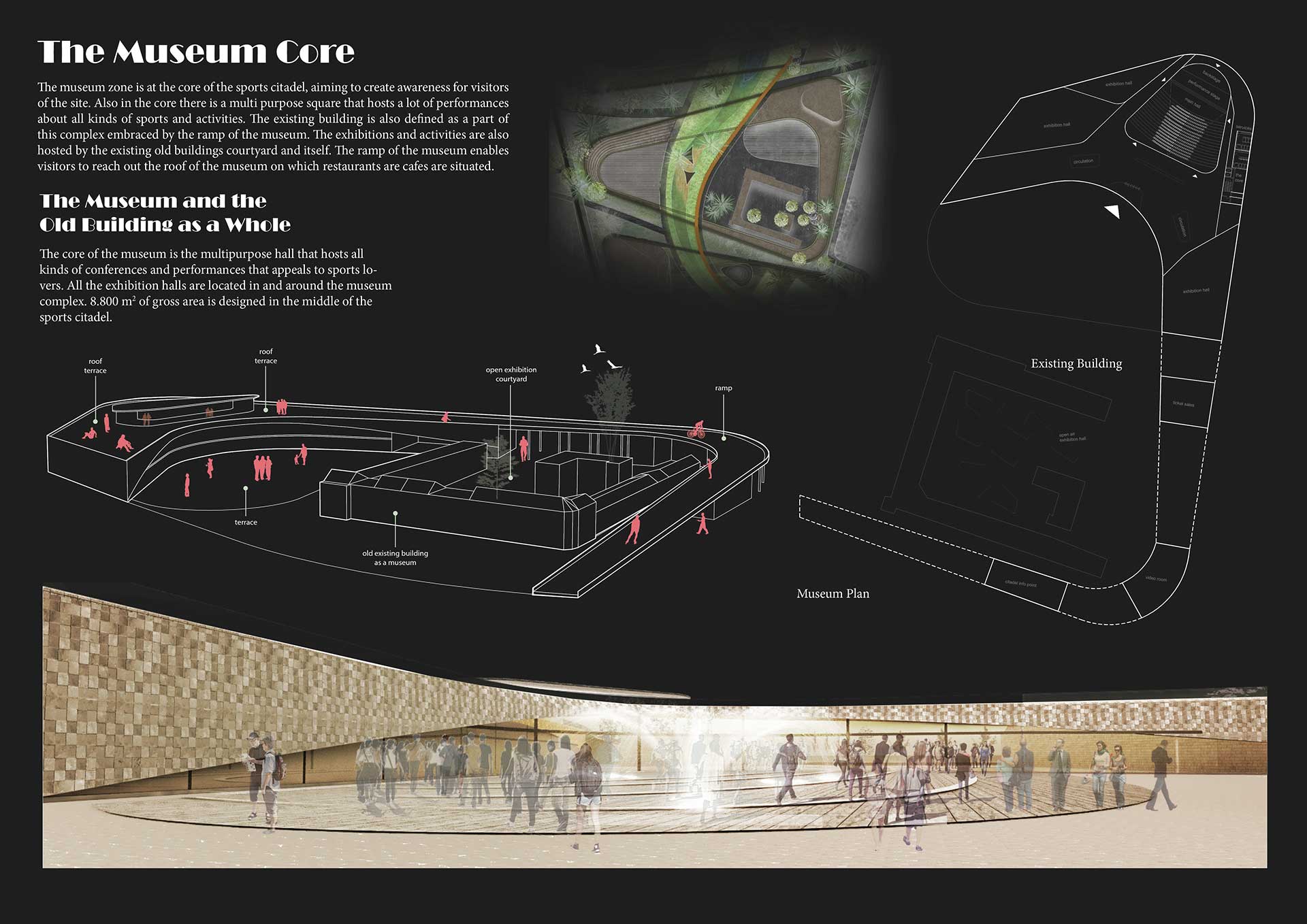 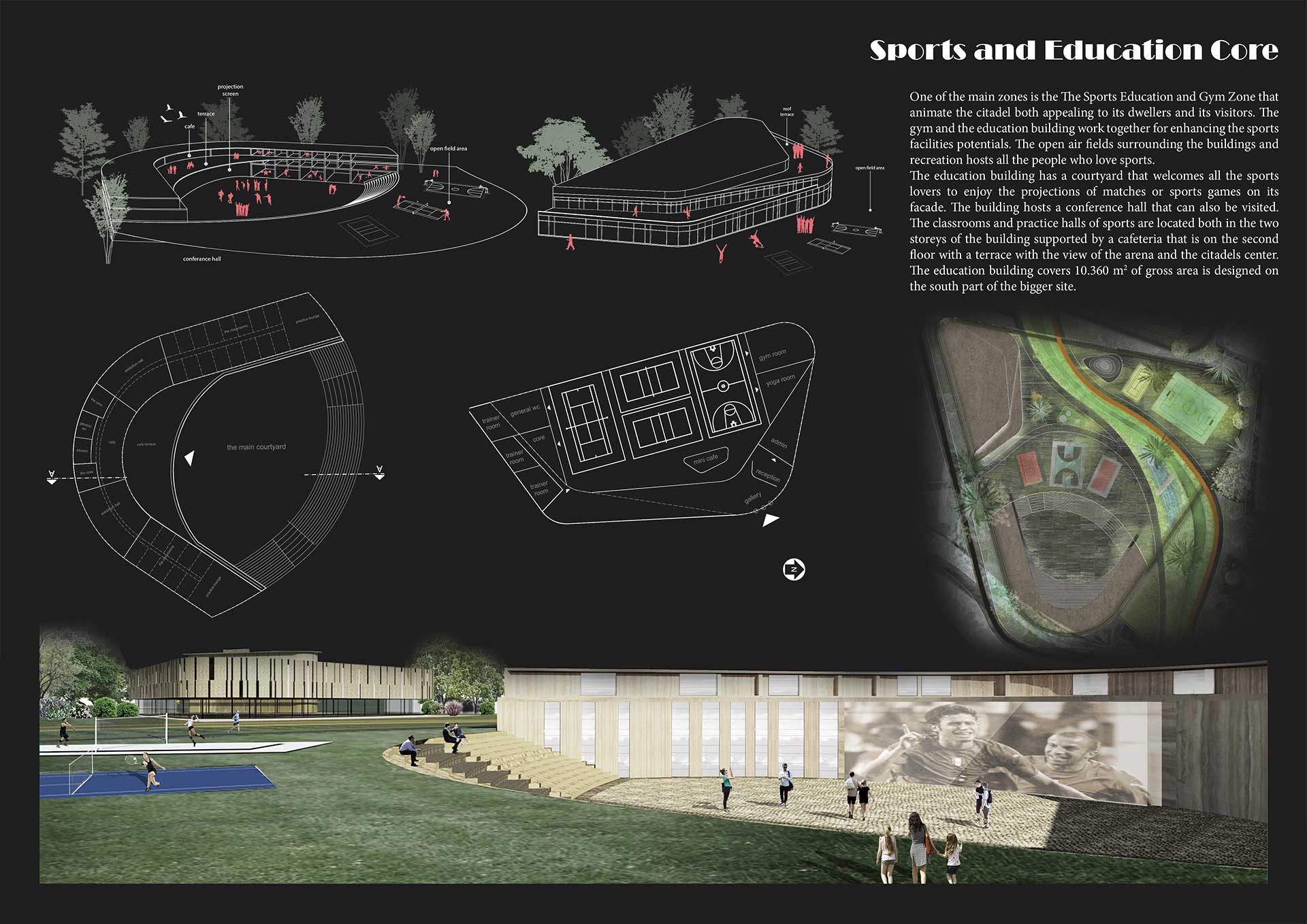 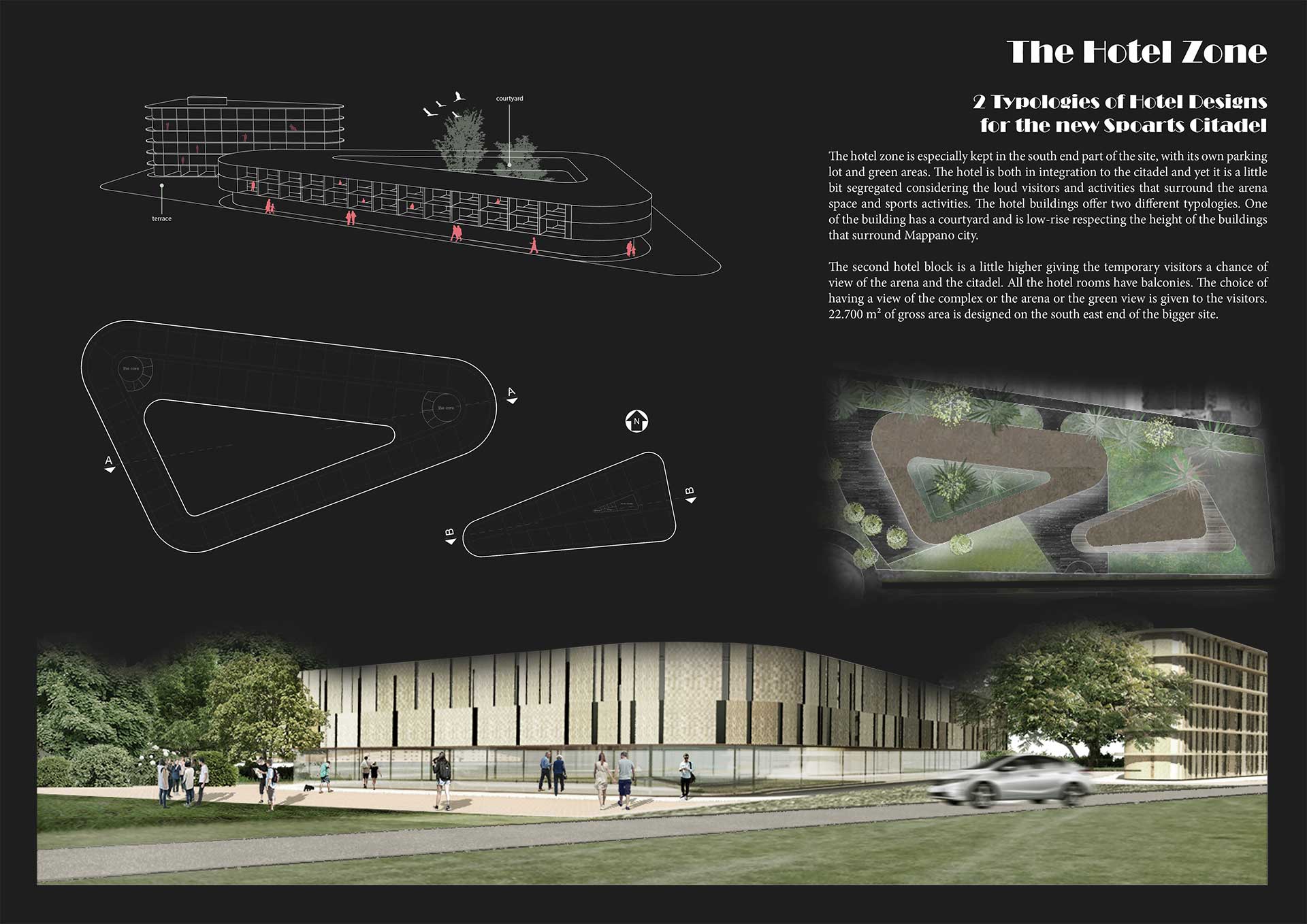 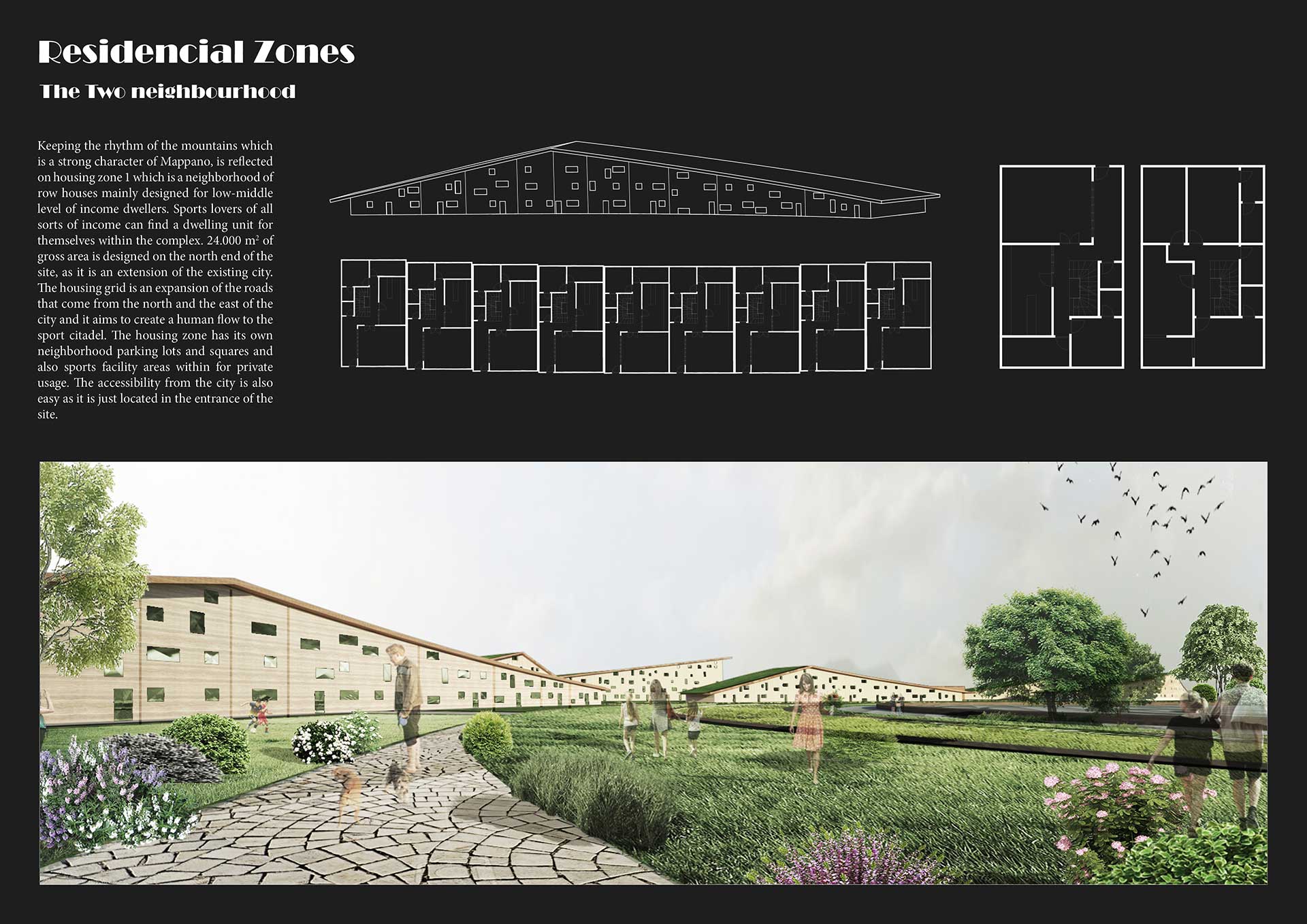 One of the initial concepts that give the project its name was to create zones of compact facilities yet always combining them with rings and create a great flow of accessibility. The rings are created both for car and pedestrian routes also enabling cycling and running path access. The zones are defined by running paths that go around them which also shapes the buildings borders. The flow of human access have been the main motivation in designing this huge site. The division of the two main sites that is given in the competition is united with both road ring and recreation ring (the green belt). The primary intervention is to create a compact sport citadel full of activities on the left hand site, on the main site and create a zone for houses that offer more privacy on their own in the single housing blocks. One of the main rings, that is named as the road ring, is the road that enables shortcut access to all the facility zones and the housing zones. Around this route there are great numbers of parking lots that enable direct close relation to the zones of arena, museum, sports and education, hotel and different typologies of housings. This accessible ring proposal offers the division of pedestrian and car routes. This way the inner zones of sports and facilities are not disturbed and the recreation green belt can enable an organic human flow within the citadel.

The green belt ring, that is derived from the existing park that is on the south end of the site, is encircling all of the intervention areas by joining the human flow. The main decision of not touching a single tree that exist on the site, is enhanced by the additional trees on the recreation route. This recreation green belt is shaped by the intervention of the core building masses of the project yet still keeping the human flow idea taken from the existing route of grid that comes from the city (i.e. diagram 03) The grid that is derived from the city access gets deformed by the power of the cores of the zones, and they also shape the green belts flow. The Zone Rings are defined by the designers in order to create compact and emphasized sports facility zones. These zone rings enable shortcuts for pedestrian accesses. These zones sometimes become a bridge or a route that overlaps with the recreation green belt.